NBA 2K14 brings emotion to basketball like never before seen in a video-game. By NBA 2K14’s new engine, Eco-Motion, we were able to emote players in ways only imaginable on the next-generation of consoles (PS4 and X1). Some of the new features include player rhythms, personality badges, game significance, player reactions and behaviours. Here is a deeper look into NBA 2K14’s emotion and how we are advancing the game of basketball like never before.

New in NBA 2K14 next-gen is a gameplay feature called Player Rhythm. It’s a complete re-design of the streak system – which drives how a given player gets Hot/Cold throughout the game. A player is no longer restricted to being “Hot” in just shooting alone like in the past. We have added Ball Control and Defense into the mix, allowing players who specialize explicitly in passing/distributing the ball or defending and shutting down opponents to get in rhythm as well. Players can now play to their potential given that they perform well on the floor on both sides of the ball.

Rhythm is broken down into 3 areas of performance:

Performing positively or negatively in each of these areas throughout the game will have an ongoing effect on a player’s Rhythm for those same areas. For instance, a player who gets a couple of early steals and blocks could get his Defense Rhythm up. A ball-handler who turns the ball over frequently could lose confidence in his dribbling skill as his Ball Control Rhythm gets Cold. 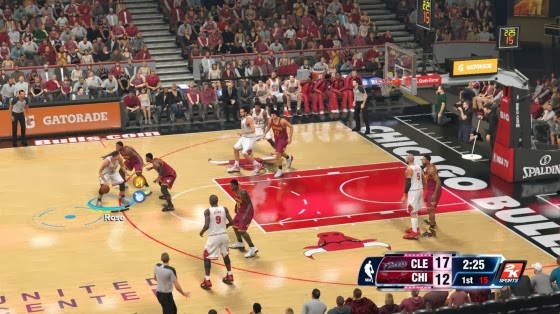 Derrick Rose is Warm on Shooting, but Cold on Ball Control Rhythm

There are a total of 5 states a player’s Rhythm can fluctuate between. The color of the Rhythm Icon shows you what state they are currently in (Neutral will simply not display any icons at all).

PS4 Tip: On the PS4, you can click the Touchpad at any time for a Rhythm Check. This will turn on the Rhythm icons for all of your teammates on the floor.

Now that you know what the new Rhythm system is, let’s talk about the new Personality Badge feature and how the two work together. Personality Badges tie-in to how a particular player gets in (or out of) Rhythm during a game. Not all players are created equal. Some players can come in at a high Rhythm when the team needs him most, other players can feed off the crowd energy, or a player who can get into an opponent’s head and put them out of Rhythm. 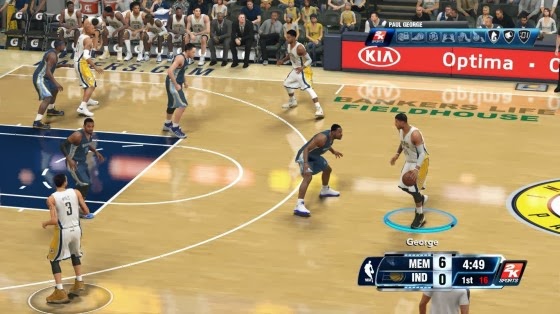 When you bring up the in-game HUD (by pressing DPAD-Up during gameplay), you will now notice two sets of icons: Signature Skills and Personality Badges.

Personality Badges are displayed alongside Signature Skills. You can bring up the HUD by pressing DPAD-Up during gameplay.

There are a total of 21 badges in the game, and each player can be assigned up to a maximum of 3. A full list is located down below for a breakdown of what each badge means and their impact on rhythm, what its icon looks like in-game, and player examples around the league.

I would also like to take this time to point out that 6 of badges were previously Signature Skills* from NBA 2K13.

Badge: Alpha Dog Description: A player who leads and shoulders the responsibility for the team’s overall performance. When teammates on the floor are doing poorly, he will receive a Rhythm boost. Player: Derrick Rose, LeBron James, Carmelo Anthony

Badge: Floor General* Description: A player known to make his teammates better, offensively, while he is on the court. Teammates receive a boost in their Shooting and Ball Control Rhythm while he is on the floor. Player: Chris Paul, Deron Williams, Mike Conley

Badge: Defensive Anchor * Description: A player known to make his teammates better, defensively, while he is on the court. Teammates receive a boost in their Defense Rhythm while he is on the floor. Player: Marc Gasol, Tyson Chandler, Andrew Bogut

Badge: Mentor Description: A player who can get less experienced players back in Rhythm. A teammate will experience less of a Rhythm drop when is on the floor. Player: Al Jefferson, Caron Butler, Derek Fisher

Badge: Heart and Soul Description: A player who keeps the team focus on the task at hand. When the team is coming back from behind, or when the team is losing their lead, he can get his teammates’ Rhythm back up. Player: Joakim Noah, Tyson Chandler, David West, Chauncey Billups

Badge: Closer * Description: A player known for elevating his game in clutch situations. In the last few minutes of the 4th quarter and all overtimes of a close game, his Rhythm receives a boost. Player: Dirk Nowitzki, Kevin Durant

Badge: Hardened Description: A player that can power through fatigue or playable injuries. His attributes take fess of a penal, if he decides to play through it and stay in the game. Player: Shawn Marion, Andre Miller, Jrue Holiday

Badge: Fierce Competitor Description: A player who steps up when being outmatched by an opponent. When the opposing player gets in high Rhythm, he will receive a Rhythm Boost himself. Player: Dwyane Wade

Badge:, Volume Shooter Description: A player who needs frequent shots to get in Shooting Rhythm. He can slowly increase his Rhythm regardless of makes or misses. If he does not shoot enough, his Rhythm can take a quick hit. Player: Carmelo Anthony, Ben Gordon, Monta Ellis

Badge: Streaky Description: A player who gets heavily affected by made and miss. shots more than others. His Shooting Rhythm can fluctuate more after each make or miss. Player: J.R. Smith

Badge: Dialed-In (Microwave)* Description: A player who relies heavily on maldng shots early in order to increase his Shooting Rhythm. If his Shooting Rhythm is off, made shots do not count as much to get him out of a slump. Player: Kyle Korver, Gordon Hayveard, Ryan Anderson

Badge: Spark Plug Description: A player who enters the court already at high Rhythm, limited to once per half. Teammates also receive a boost in their Rhythm when he makes big plays. Player: Jarrett Jack, Nate Robinson, Jamal Crawford

Badge: Unpredictable Description: A player with a lot of fire and passion. He receives a Rhythm boost during the game’s intense moments. Player: DeMarcus Cousins, Larry Sanders, Andrew Bynum

Badge: Fan Favourite Description: A player who feeds off the energy of the crowd. During his first few minutes on the floor, his Rhythm can quickly increase when performing positive plays. Player: Jimmy Butler, Anderson Varejao, Iman Shumpert, JaVale McGee

Badge: Mind Games Description: A player who can get into an opposing Player’s head and throw them off their game. He can affect an opponent’s Rhythm while closely guarding them. Player: Matt Barnes, Kevin Garnett

Badge: Enforcer Description: A player who can quickly get an opponent out of Rhythm by wrecking havoc on the floor through tough and physical play. Player: Kendrick Perkins, Metta World Peas, Tyler Hansbrough

Personality Badges become available in MyCAREER as you progress through that mode. They are automatically unlocked as you hit certain milestones and achievements. You will then be allowed to equip up to 3 badges for your player.

Going deeper in feature, we also take into account the context and significance of a particular game to a given player or the team as a whole. These can have an impact on how players could potentially perform for that game.

Hometown Games: Playing an Away game in a player’s hometown. Commentary will also point out these games to clue you in on whose homecoming game it is.

Visiting Old Teams: Playing against an old team whom a player has a history with. James Harden playing back against Oklahoma is a good example.

Rivalry Games: Some rivalries stand the test of time and some fizzle out. Players can get in Rhythm earlier during these matchups.

Games against Power Teams: Some teams tend to elevate their game when up against powerhouses.

Playoff Ramification Games: All games matter, but it definitely matters more when a playoff spot is on the line.

The role of Personality Badges does not stop with player Rhythm. On top of getting players to behave and react to what goes on around them, we also consider what type of player they are so that everything that you see in-game plays within context. 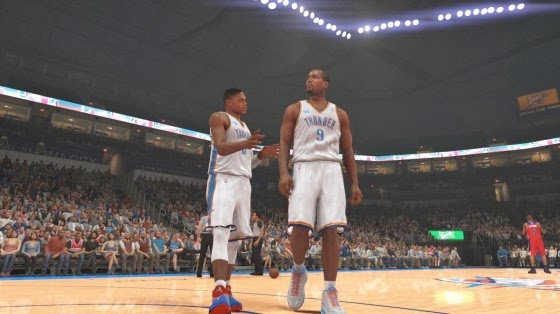 Westbrook going over the previous play with Ibaka

Team leaders such as your Alpha Dogs, Floor Generals, or Defensive Anchors will direct teammates and game plan for the next possession. Swagger type players are more apt to play the more over-the-top celebrations. Unpredictable players will exhibit emotional reaction to calls and might even lose their cool. These are just a few examples, but the level of detail adds to the overall experience so that players behave like their real-life counterpart.