The Park was first introduced in NBA 2K14. It was the first iteration of a revolutionary mode unseen in any sports game, bringing MyPLAYERs together to play casual games of street ball. This year, the world is getting bigger and the stakes higher. The Old Town Flyers, Sunset Beach Ballers and Rivet City Rough Riders are recruiting true competitors to represent their community in NBA 2K15’s MyPARK mode.

Each affiliation has its own 8-court home park and unique flavor of basketball emphasized by slight boosts to various aspects of your game. Pledge your loyalty to one and start making a name for yourself.

The Old Town Flyers are all about looking good on the court. They like the flashy passes and Size-Ups. They’re also tight defenders that may lead to quite a few fast breaks capped off with an alley dunk.

The Sunset Beach Ballers are all about scoring. From layups to mid-range jumpers to long threes, these players cannot be left open for 1 second.

The Rivet City Rough Riders are the physical type. What they don’t swat out of the air will end up being rebounded. And on the offensive side of the ball, stay clear unless you’re fond of being posterized by a slam so hard it’ll shake the screen.

You’ll pledge your loyalty to one of three affiliations

The Old Town Flyers, the Sunset Beach Ballers or the Rivet City Rough Riders. Each has its own eight-court home park and unique flavor of basketball, emphasized by slight boosts to various aspects of your game.

After selecting a park, you’ll begin earning a reputation for yourself with MyPARK rep, an earned-only feature which takes into account not only wins, but your teammate grade and opponents. As your rep increases, you will unlock various MyPARK-specific upgrades.

If street ball isn’t for you, try out the Jordan Rec Center (Preview), which features four full-sized courts and five-minute quarters of 5v5, NBA rules basketball. Games played here also count toward your MyPARK Rep and the MyPARK Championship.

Whether you prefer playing on hardwood or the blacktop, form a Squad with anyone currently in your park by viewing the list of players and sending them an invite. Once you have your team, use any designated Squad area located on each court. When that game is over you will all step onto the court together as a Squad.

Watch the MyPARK trailer too.. 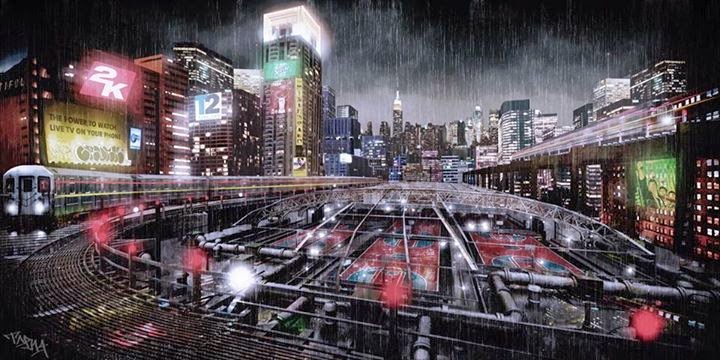 The familiar park layout of 2K14 makes its return on the rooftop of a building located in the heart of the city. This is a neutral site where the love for your park is set aside for your love of VC. It’s time to put your VC where your mouth is. Step up to one of the courts and Ante-Up the amount of VC displayed. Win and you split the pot with your team. Lose and you’ll be walking off the court with lighter pockets. Squads are supported here as well.

For those of you that enjoy high-stakes gaming, we have the High Rollers area with Ante amounts up to 30,000VC or higher for a single game!

The Stage will be exclusive for the PS4 version for the first 30 days. It will be available on all platforms starting November 8th.