This was Kobe Bryant’s last NBA game, so we all knew he was going to make it large. But no one expected it that large - 60 points in his career finale! Mamba went out making records! Here is the best of Kobe’s last game (saying his last hurts a lot) at Lakers home court against Utah Jazz. 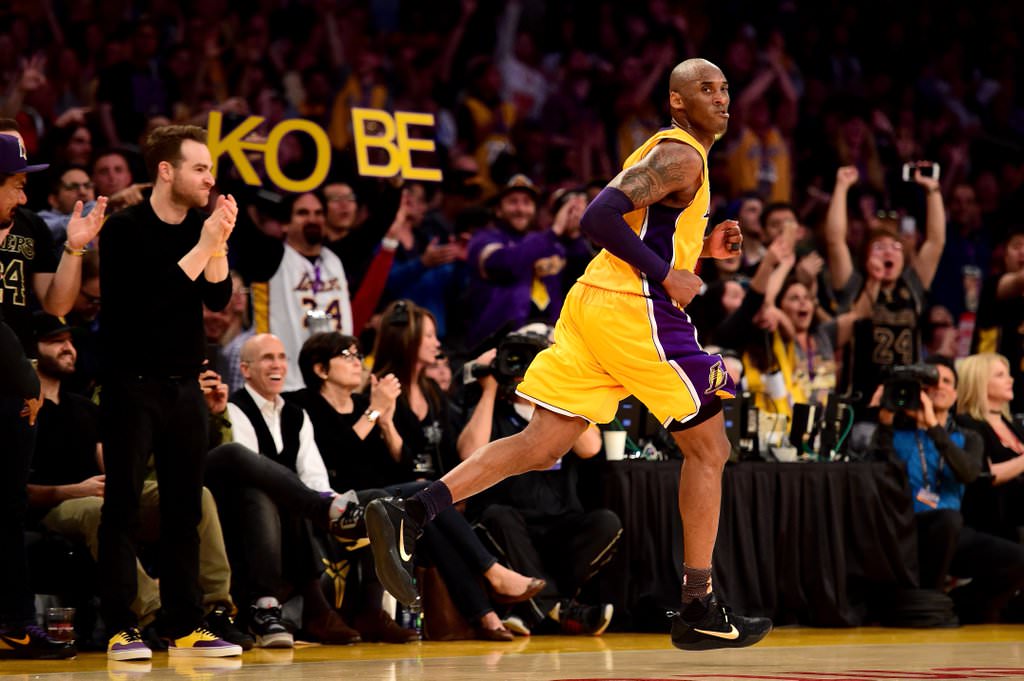 [SPOILER ALERT (watch the game game if you haven’t watched yet!)] The game started. Fans expected a lot. We all expected a lot. There is a cheering noise as Kobe gets the ball. This happens throughout the game. Kobe goes for shot, but he misses at 5 consecutive attempts.

Now Mamba fires up. He makes 5 consecutive field goals including a 3 pointer, and also some free throws. Now the crowd is fired up! Kobe’s on fire! Staples center is on fire! The crowd chants “MVP!” as he makes more shots.. and puts Lakers in lead. At the end of first quarter, Jazz leads 21-19 over Lakers.

Kobe Bryant rests for a few minutes in second quarter and plays the whole game after that. In end of 2nd quarter, Lakers’ fans start losing hope for a win as Jazz leads over Lakers 57-42. Kobe Bryant had 22 at half time, so we knew he’s gonna make a show!

Now Mamba comes back! Back-to-back-to-back buckets from the Mamba! Kobe follows a contorting layup with a jumper and another layup to reach 28 points!. Heading to the final quarter of his career, Kobe has 37 points!

And now we all all started counting each point he makes (we were doing this whole game though, but now it becomes special as he’s gonna make more history!)

Kobe hits a three-pointer. He now has 43 points in 33 minutes with 8:30 left in this game. Age 37+ 40-point club: Kareem, Jordan, Mailman, Dirk, Kobe. Kobe Bryant’s 43 points are the most by a player in his final regular-season game in NBA history. 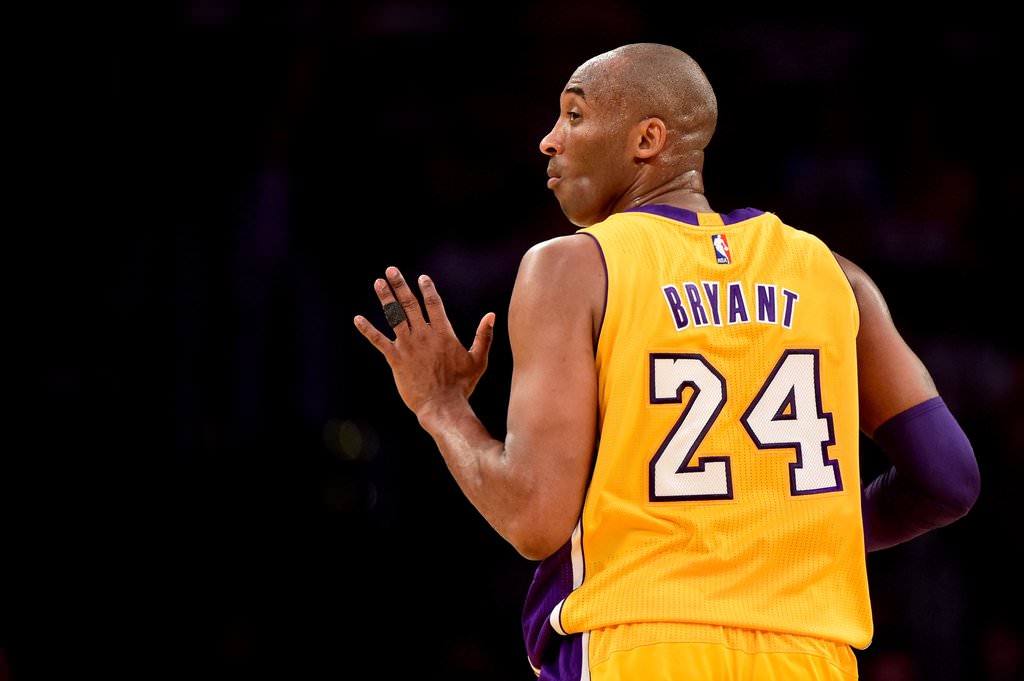 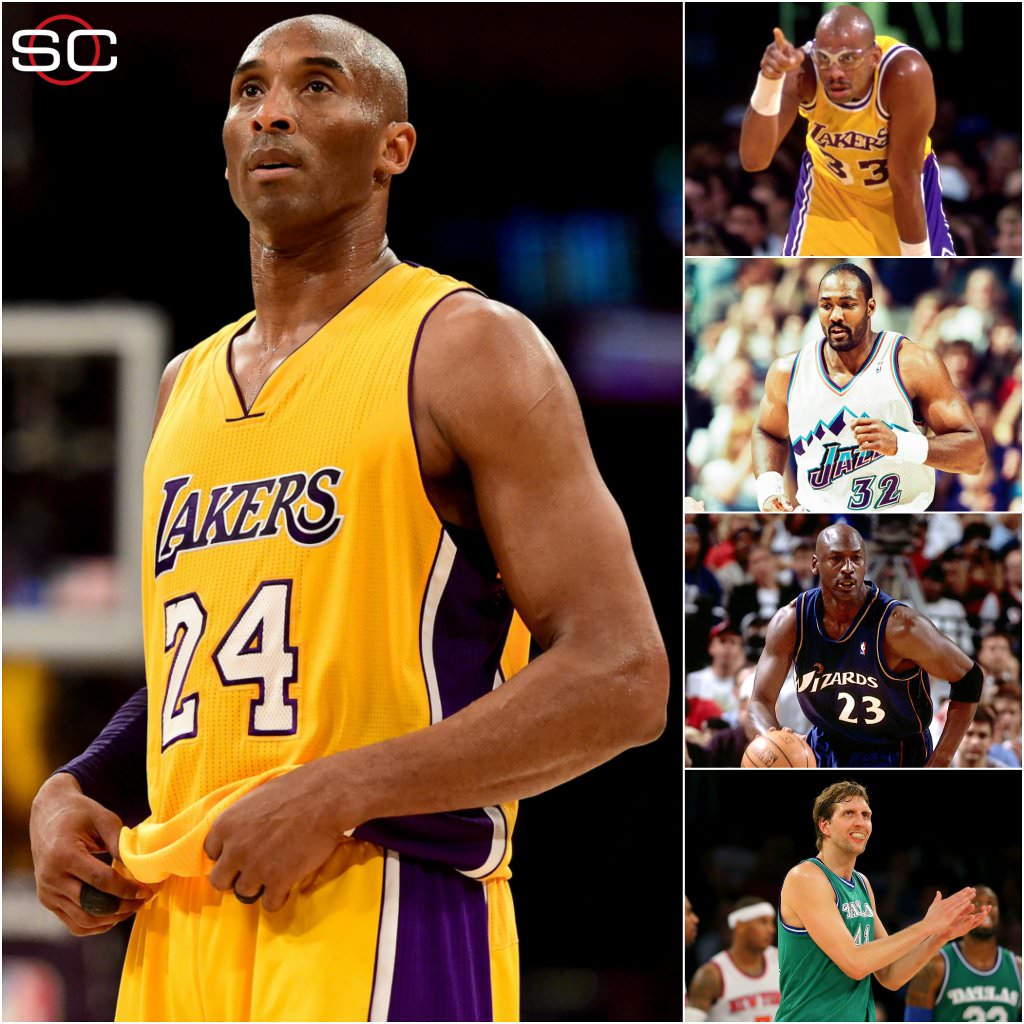 Kobe gets his 47th points on his 46th shot. Same FGA as the 81-point game. Well who isn’t excited! 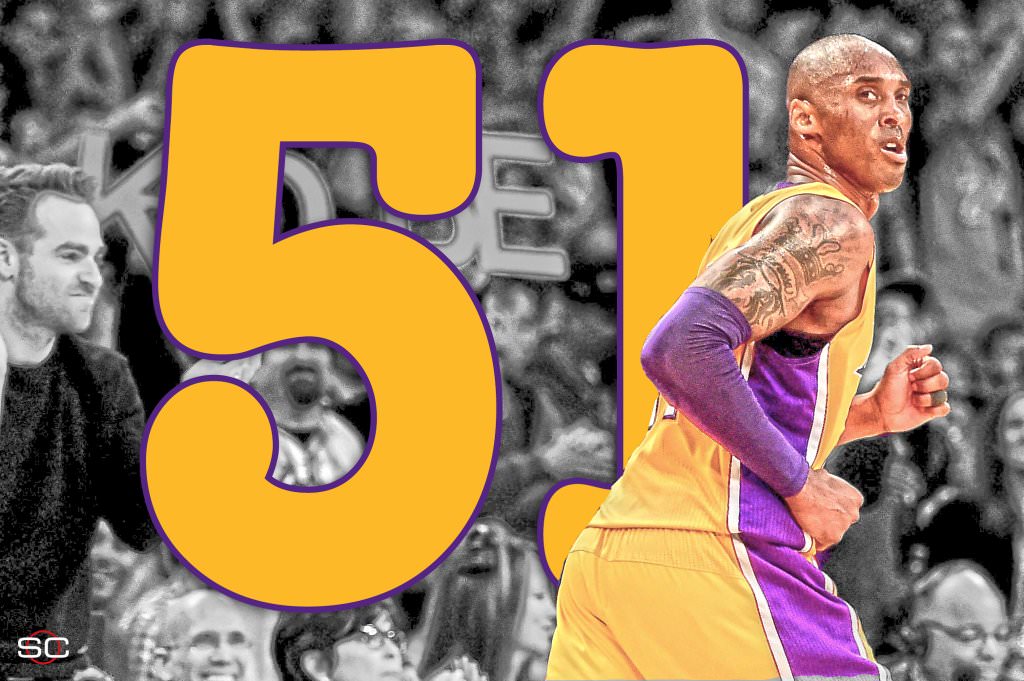 Only the Black Mamba could go out like this. But he’s not done yet! He goes for more as he gives Lakers lead over Jazz. Now this is a comeback! With the entire Staples Center crowd standing, Bryant made a 3-pointer with 59 seconds left. He hit another with 31 seconds to play, putting the Lakers ahead 97-96. He finished with an assist before checking out for good with 4.1 seconds left in just the Lakers’ 17th win of the season. Kobe has got 58 points and he gets fouled. Kobe makes both free throws and he’s got 60 and Lakers got a three point lead. Now Kobe throws a long pass to Russell and he dunks it, giving Lakers an end-game 5 point lead over Jazz! Lakers outscored Jazz 35-21 in 4th quarter. and Lakers (and Kobe) win their season (and career) finale 101-96 against Jazz.

Kobe Bryant checks out of his final game to a standing ovation and fans chanting his name. What a game. What a career. Kobe Bryant closes his career with 60 points (22-50 FG, 44%) in final NBA game 3rd on the all-time scoring list

“The perfect ending would have been a championship,” Bryant said with a smile. “But tonight was (me) trying to go out, play hard and try to put on a show as much as I possibly could. It felt good to be able to do that one last time.” Kobe Bryant: “You can’t write something better than this.” … “Mamba out.”

“We weren’t trying to let him go off on a win,” said Joe Ingles, who guarded Bryant closely. “As it goes on, it will sink in more, and what he did was pretty impressive. He made some tough shots, too. I don’t think we gave him any open looks. He was obviously pretty hyped up for the game. Forty-two minutes and 50 attempts will get you 60, apparently.”

Shaq wanted Kobe to hit 50 points in his retirement game, but Mamba other other plans.. “Absolutely not man I’m getting 60!” He gave him 50 FTA though. 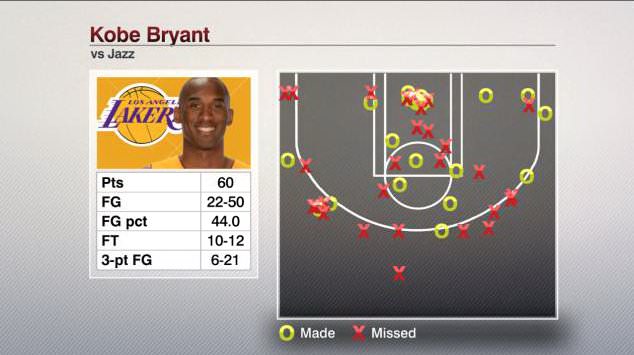 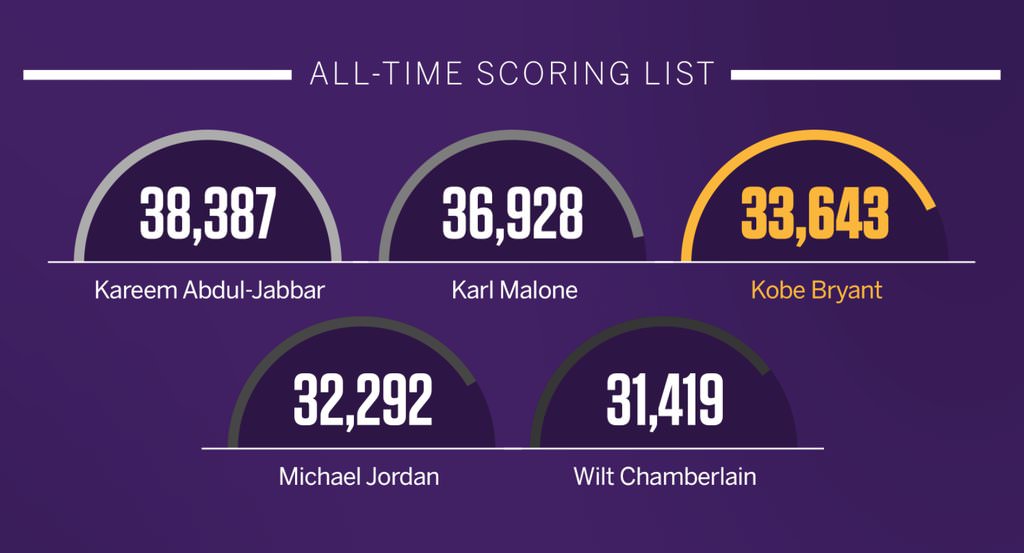